Developer sales is the key activity for primary market where many new homes are transacted daily. With the stable stream of land supply from both Government Land Sales Programme and collective sales, Singapore developers provide the market with steady stream of new projects coming on the board. 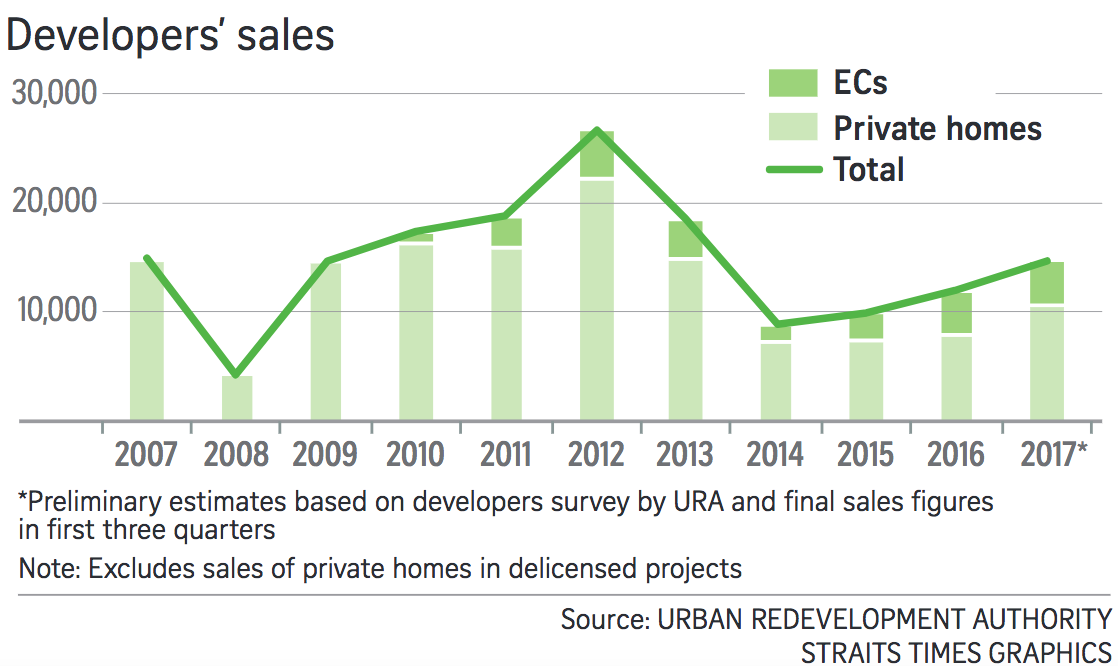 Developers have clear down their unsold inventories in older existing projects. Most of them have already been more than 80 per cent sold. Some developers such as Capital Land, Lendlease, Qingjian had hold up their projects for sale in 2017 and will relaunch in the wake of an expected upturn in prices this year.

The overall property prices are picking up too with rise of 1% in the third quarter 2017. Many developers have increased prices for the balance units of their projects for several times. Here we just name a few, Northpark Residences, Gem Residences, Sims Urban Oasis, Kingsford Waterbay, Queens Peak, Commonwealth Towers, Principal Garden. For exmaple, new development Kingsford Waterbay has increased the price from $1,100 psf in March 2015 to $1,363 psf in November 2017.

With competitive participation in Government Land Sales and collective sales fever in 2017, the market is expected to see over 20 major private non-landed projects with the potential to yield 10,000 to 12,000 units (excluding ECs) could be put on in 2018.

Property consultants have projected that the potential developer sales price increase this year from 3% to as high as 15%, following a 1% uptick last year. This is highly possible to occur in 2018.

Just imagine the increasing land bid prices and mush higher transaction prices than the reserve prices from collective sales. Economy fundamental is still quite healthy, and stock market moves with an uptrend in 2018 too. More than 3,000 en bloc home owners with sales proceeds will enter the market to seek their replacement homes.

The first project to come onstream in 2018 is City Developments’ New Futura, a 124-unit freehold luxury development in Leonie Hill in District 9. Sales start on 18 January through appointment-only viewing, with prices starting from $3.8 million for a two-bedroom unit of 1,098 sq ft, according to property agents.

Next in the launch pipeline is expected Twin Vew at West Coast Vale by China Construction (South Pacific) Developments in March or April and The Tapestry in Tampines Avenue 10 by City Developments in April or May.

Also in the pipeline is the only new EC project this year – Rivercove Residences, jointly developed by Hoi Hup Realty and Sunway Developments. It is likely to launch in March.

Property consultants expected that the developers will sell over 12,000 private residential units in 2018.