Is it a good time to buy private property?

Is it a good time to buy private property? When come to the good timing for property investment, it’s more about understand the market from the facts and figures than emotional reaction. Upon you are financially ready, kindly please look into the market with logical thinking and risk management in mind. Are there people who lose money in good market? Are there people who make money in bad market? There are actually no good time or bad time, but your holding power and entry price. Here we will go through the 9 typical factors to get better idea about the current property market in Singapore.  Those factors are very good reflection on what prospect buyers, developers and the Government behavior.

The market sentiment in 2017 has improved significantly. Developers have sold more than 11,000 private units by the end of November. This is the first time that record over 10,000 new home sold annually since 2013.

Developer unsold inventory has dropped to the historical low, near 17,400 private residential units as of the third quarter of this year from more than 32,000 units in the third quarter of 2013. Better buying sentiment and healthy economy growth play the role amidst the strong interest in Government Land Sales and en bloc sales.

Total number of unsold private residential units in the pipeline

Private residential resale market is taking off in March 2017 when sales of new launches started to do well. Resale prices of non-landed private homes picked up 0.5% in November from October, preliminary estimates from SRX Property showed on Tuesday (Oct 10) amid growing signs of optimism in the property market.

Demand surge push buyers and investors who prefer the resale market where they can have a wider choice of different projects and different types of units in the resale market as the number of unsold new launches in the past 12 months has been limited.

The private residential market is thought to have bottomed out around the middle of this year and now seems to be on a recovery trend, with sustainable buying activity in both new projects and the resale market.

Both new project and resale home prices has bound up. In 2017, Many developers have increased prices for the balance units of their projects for several times. Here we just name a few, Northpark Residences, Gem Residences, Sims Urban Oasis, Kingsford Waterbay, Queens Peak, Commonwealth Towers, Principal Garden. For exmaple, new development Kingsford Waterbay has increased the price from $1,100 psf in March 2015 to $1,363 psf in November 2017.

Those motivated developers expect the market will improve further next year. The potential for long-term asset appreciation is very attractive and thus they believe that the future launch will better reflect the value that new projects offer.

In the past few years and even earlier time, Government Land Sales (GLS) is the main source for developer to replenish landbank and develop private homes.  In 2017, the Government have provided 5,710 private homes in confirmed list and 10,420 private residential units in reserved list, which is 53% more and 9.2% less than that in 2016, respectively.

Thanks to improvement of market sentiment, pending-demand from home buyers, hungry developers for land, GLS market become hot in 2017. According to The Straits Times report, we have witnessed the record numbers of bidders and historic high price quantum of land bids for GLS Land programs. Such higher land bids come on the back of higher sales volumes of private residential homes in 2016 and 2017.

The Government has decided to keep the total supply of land for private residential development for the first half of 2018 at about the same level as that for the current second half 2017 slate, citing among other factors, sufficient supply from the redevelopment of collective sale sites being generated from the private sector.

On the one hand, there is strong demand for sites by real estate developers, and a pick-up in transaction volumes. On the other hand, there is a large potential supply of around 20,000 units from awarded en-bloc sale and GLS sites that have not yet been granted planning approval, on top of the around 18,000 unsold units that already have planning approval.

Collect sales is another keyword in Singapore property market 2017. The property market is feverish with en bloc deals, by 15 November, there have already been 20 residential projects, totalling about 2,900 units sold through en bloc transactions, up from 6 deals in the whole of 2016 and 1 deal in 2015. The collective sales have already exceeded the $6.34 billion figure calculated by the property consultancy. 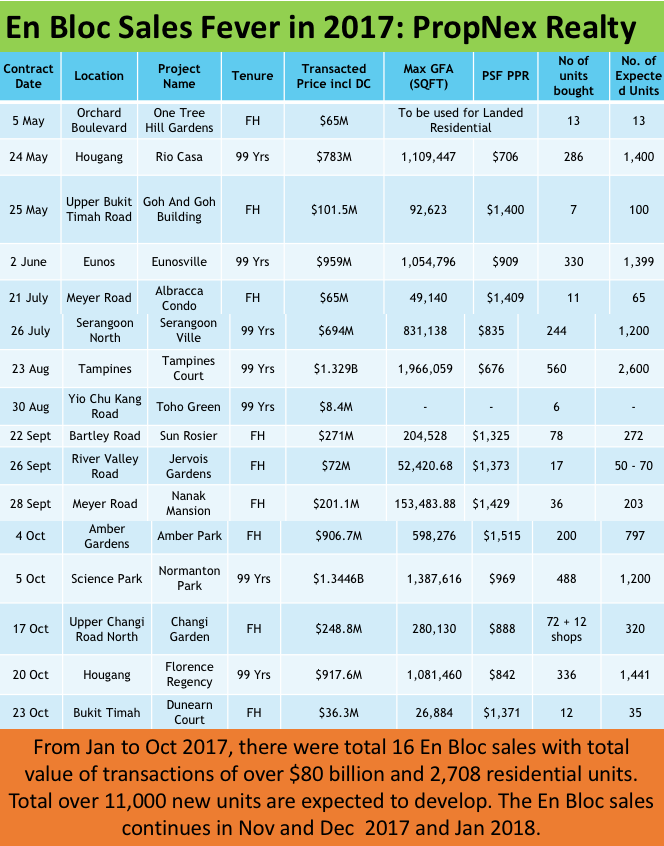 The record-setting sums being paid by land-hungry developers at state tenders and collective sales have galvanised owners across the island keen to hit the jackpot. According to Channel New Asia and consultancy report, the collective sale frenzy sweeping the property market is expected to continue into next year, resulting in an upswing in home prices and transactions as displaced owners look for a new place to live.

At least 44 condominiums are expected to go en bloc next year, creating more than 9,000 potential house-hunters, according to data from property consultancy Cushman & Wakefield.

The Singapore economy grew 5.2 per cent between July and September, the Ministry of Trade and Industry announced on November 23 as it revised its 2017 gross domestic product (GDP) forecast to between 3 and 3.5 per cent, up from its initial range of 2 to 3 per cent.

Meanwhile, according to the latest survey done by Monetary Authority of Singapore (MAS), private sector economists and analysts have raised their forecast for Singapore’s economic growth this year to 3.3%, for next year, the respondents on average believe the economy will most likely grow between 2.5 and 2.9%. Going forward, the electronics sector, external growth and the property market recovery are top potential upsides for the Republic’s economy.

The Straits Times Index (STI) has picked up from the recent low of 2016 and jump up more than 30%, thanks to an outperformance in property and bank stocks amidst an economic recovery. According to Yahoo Finance, the STI has increseaed 19% from Dec 2016 to Dec 2017.

Since the finance crisis from 2008, the mortgage interest rate has bottomed at historic low.  This is one of the major reasons that boom Singapore residential property market. However, the long time low interest environment has changed as US economy recover and grow steadily.

The home loan benchmark, the three-month Singapore Interbank Offered Rate (SIBOR) has jumped up from November, which is in response to tight liquidity conditions due to seasonal factors and the three times of increase of interest rate by the US Federal Reserve this year.

DBS Bank, OCBC Bank and United Overseas Bank (UOB), which collectively account for the lion’s share of the housing loan market, have increased the interest rates on their fixed-rate and floating-rate packages since November, 2017.  It’s time to take action quickly to lock down good rates for refinancing, or even new purchase. The behaviours of the three local are good signal for the mortgage loan market since they can see and foretell the trends in the money market before everyone else.

Whether you look at prices or policy, the property markets in Singapore and Hong Kong are running apparently in opposite directions. According to the news reported by Bloomberg in November 14, 2017, Singapore residential property is more affordable than Hong Kong. 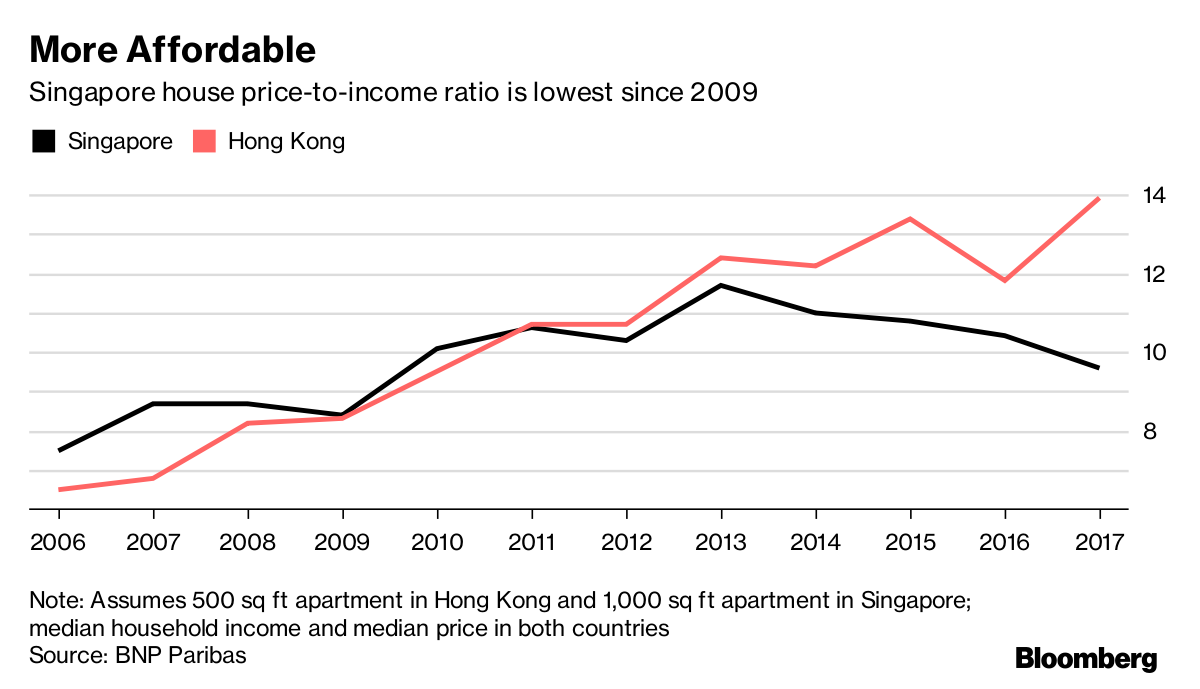 Singapore eases some property curbs in March 2017 after housing prices decline for more than 3 years. Hong Kong tightened some restrictions in after prices rallied following short-lived dip from September, 2015 to March, 2016. The curbs including the 30% Additional Buyers’ Stamp Duty in Hong Kong have had little impact so far, with existing home prices rising to all-time highs amid brisk demand from buyers.

Hong Kong is currently ranked one of the most unaffordable housing market in the world. What’s more, the price of private housing which dominates the Hong Kong property market, keep rising beyond the reach of most people. Singapore private residential looks more affordable.

Since 2009, the Government has imposed 7 round of cooling measures to maintain a sustainable property market. In March 2017, there were introduction of calibrated adjustments to the Seller’s Stamp Duty (SSD) and Total Debt Servicing Ratio (TDSR) framework.

The rules on the TDSR framework will be exempted to the house owners who apply for mortgage equity withdrawal loans with loan-to-value ratios of 50 per cent and below.

Such fine-tuning of the cooling measures actually acts as a signal, and it becomes a catalyst to elevate market sentiments. There are firm demands for private housing, in part because of current low interest rates and continued economy and income growth.